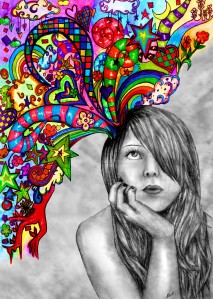 Being a lover of food, I enjoyed all my meals immensely but it was only the after school meal that bored me out of my wits. Mum would always save me a big bowl of rice and veggies and curries and sometimes some fried fish too. It was supposed to feed my growing body. My horizontally growing body, that is. The cliche that Mums are blind to the shortcomings in their offsprings is true and couldn’t be truer in my case for at a time when I could do with the skipping of a meal or two, I was being fed an extra meal of carbs with a little bit of veggies thrown in.  Being the good daughter that I was, I ate it all without so much as a whimper. Just kidding, I loved it. I still do. Carbs and saturated fats speak to me at a personal level.

Anyways, this one meal was the one I dreaded the most cause it was the only time a meal seemed like a chore to me. Sitting down at the dining table on my own with a mount of rice to conquer was a daunting task. It was less to do with the food and more about the lack of company. I was bored and that boredom was affecting my affection towards the meal.

One day I was mindlessly trudging through my meal when a King in all his glory appeared before me. When I say King, please get the Royal Family’s image out of your head. I am talking about the Indian kings, in all their finery and grandeur. Decked in ornaments from head to toe as if to reinstate his kingship. He smiled at me and said “Eat”. I looked down and saw that I had transformed and so had my settings. I was sitting on the floor of what appeared to be the walkway to the king’s castle. My clothes were in tatters and I was covered in filth. I had evidently not seen the inside of a shower in ages. I suddenly felt ‘hungry’ very very hungry which was strange cause I had rarely felt this emotion until now. I looked in front of me and there sat the most beautiful bowl of rice, veggies, curry and some fried fish. Never had that bowl of food looked as appetizing as it did now. I looked up at the King who was smiling at me and coaxing me to eat. The word had hardly left his mouth when I began to stuff my face. It was pandemonium. More rice was flying off my face than finding its way into my tummy. I literally had a rice facial. The need to eat it all at that very instant was so strong that it became the sole purpose of my existence. The more I ate, the more I wanted to eat. My vision got cloudy as a bits of curried rice stuck to my eyelashes. I still had food left in my bowl but I’d been hungry for so long that I went after the food sprayed around the bowl. I was eating off the street, lest a stray dog gets it before me. I ate it all with an urgency I had never felt in my 10 years of existence and I felt full. I looked up to thank the generous King but he had long since disappeared. I looked around and I was back in my uniform, back at my dining table. I was looked messy with curry stains on my shirt and rice in my hair. The dining table looked like a war field and an overturned glass of water only added to the effect. It was easily the best meal I had ever had.

Soon this turned into a routine. On somedays, I was a social activist, protesting against some injustice by fasting unto death and then being force fed by the military cause the government could not let me win and on others I was a freak show, a girl who could eat forever. My favourite role however has been that of the hungry beggar, a role I’ve reprised on countless occasions.

Years later I still find myself breaking into impromptu scenarios, be it while waiting for a taxi or while alone in the kitchen. It just makes life a little more dramatic.

The story so far